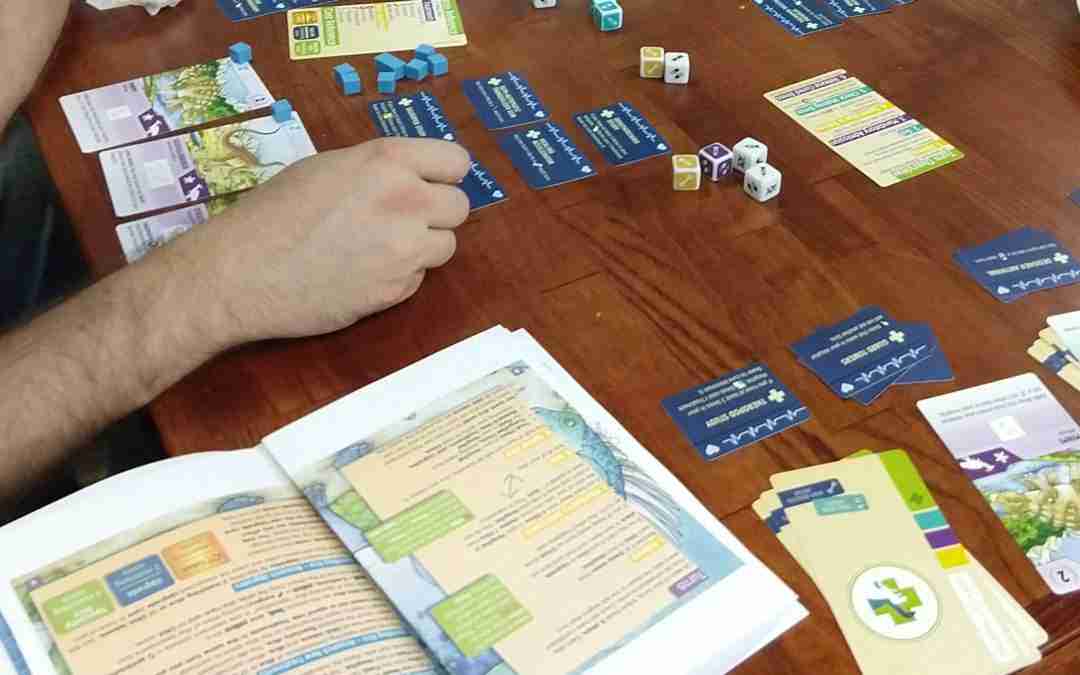 One of our goals in game design is to create games that can be fun for the whole family, which is harder than you might think. Games that are fun for young children are often boring for their parents. Games with strategic depth for adults are often too complicated for the kids. With PaleoVet we knew the theme would appeal to all ages. Everyone loves dinosaurs, but we needed to figure out how to make a game that kids and adults could both love playing.

Designing for this started with our core mechanics and gameplay loop. At its core, this is a game of rolling dice and matching icons. Pretty much everyone loves rolling dice. They have a great tactile feel, sound as they roll, and the excitement of seeing the icons you need is great. We made sure the icons are clear and distinct so that, be it young kids or older adults, matching the icons is fairly easy. Drafting dinosaurs and tracking their sleep with the sleep tokens also proved easy for all ages to grasp. Though surprisingly adults forget to remove sleep tokens more often than children do. This core loop has proven fun across age ranges and created a good base to build up from.

From there we essentially developed three versions of the game by layering on other mechanics. We see these game modes as the Light, Casual, and Standard game.

For young kids, those who might have a little trouble reading, the game is kept very simple. They still draft a dinosaur each turn. Use sleep tokens to track how long dinosaurs will remain asleep. However, the dinosaur effect text is ignored and the upgrade cards are left in the box. The actual flow of the game follows the steps laid out on the reference cards. Players start a turn with a little cleanup, then roll dice, draft a dino, spend dice, then check for waking and cured dinos. Removing the upgrade cards and ignoring the dinosaur effect text removes any need to read, which is good for younger kids, but it does reduce a lot of the longer-term strategic planning as well. So, you get a faster but more random game. Kids tend to love it, but adults may find it a little boring after a few games.

The next step up from this is what we consider a casual or beginner mode of the game. Useful when initially teaching the game to new players or for slightly older children. Here, you are adding the Dinosaur effects back into the game, but still leaving out the upgrade cards. The dinosaur effects introduce another layer of depth. They provide some chances for trying different combos and strategies, but since they are part of the dinosaurs themselves players don’t have to overthink them as much or spend resources to get access to them.  We developed this mode as a result of seeing some players avoid the Upgrade cards during playtesting. When asked why they almost universally said it was because they were not sure how to use them yet and felt spending their limited resources on them was a risk. We often find a single game of this mode is enough to prepare most players, and even kids, for the standard mode of the game. This introduction to the dino effects allows them to grasp how the Upgrade cards work.

This is the full PaleoVet experience, using all of the dinosaur effects and the Upgrade cards. Standard mode also acted as the baseline for the information you see on the side of the box. Playtime is based on the average game length when playing this mode. We based the age range on those able to understand all of the cards and grasp the strategic depth of the game. Though, obviously, with the other two modes, the game easily supports younger players. The addition of the Upgrade cards adds a lot of depth to the game’s decision-making. They cost resources to purchase, which makes buying them an important decision, but getting ahold of the right ones to support your strategy can really pay off later in the game. Once you have played the game a few times, seeing which Upgrades are available each turn can help shape a lot of your decisions.

By designing these game modes in a modular fashion, it allows the game to grow with the players. If you play the game with a younger child, say 7 or 8, you might start with the Light Mode. As they get older you move to the Casual Mode. Eventually finding them kicking your but in the Standard Mode. The game is designed so players learn new mechanics that add to the game rather than different mechanics that change the game.

END_OF_DOCUMENT_TOKEN_TO_BE_REPLACED

END_OF_DOCUMENT_TOKEN_TO_BE_REPLACED
We use cookies on our website to give you the most relevant experience by remembering your preferences and repeat visits. By clicking “Accept”, you consent to the use of ALL the cookies.
Do not sell my personal information.
Cookie SettingsAccept
Manage consent