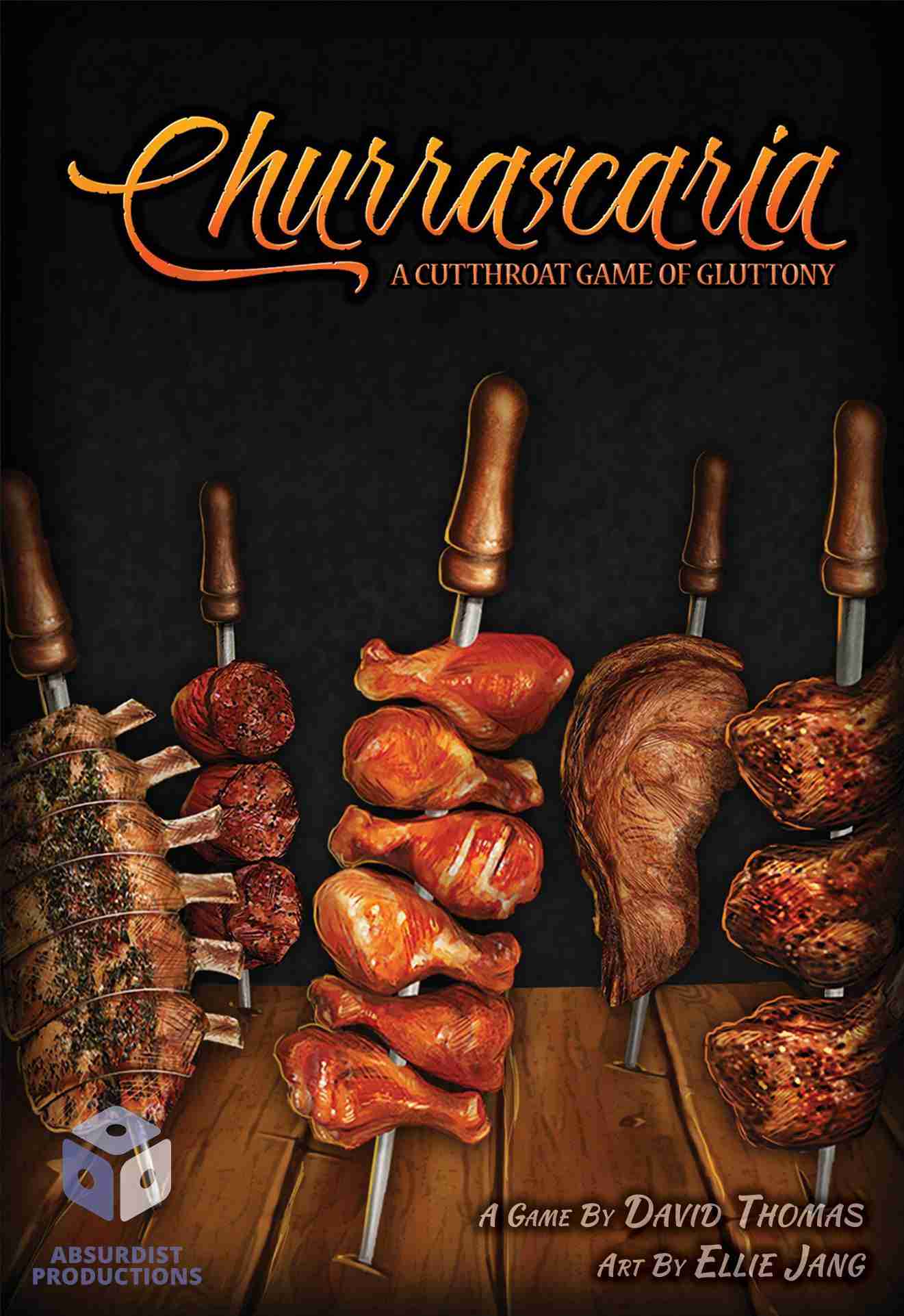 A Cutthroat Game of Gluttony

A Churrascaria (chew-haas-kah-ree-uh) is a Brazilian style steakhouse serving a seemingly never-ending supply of succulent skewered meat grilled over an open fire. An all you can eat smorgasbord of fire-roasted chicken, pork, beef and more, brought tableside and cut to order.

This game was inspired by a visit to one such establishment with a large group of friends, and the meat fueled shenanigans that transpired as we attempted to one-up each other and stuff ourselves with the amazing food that kept appearing on our plates.

Churrascaria: A Cutthroat Game of Gluttony is a fast-paced game of card collection where everyone is trying to eat all the succulent meats that appear on their plates while avoiding the equally delicious but ultimately less satisfying sides and desserts that just get in the way. All the while food theft, plate swapping, and general backstabbing keep the food flying. The person who consumes the most meat wins.

Churrascaria is designed by David Thomas and illustrated by Ellie Jang.

It consists of 112 cards, 6 chipboard tokens, and a rules manual.

Churrascaria was successfully funded on Kickstarter, raising over $11,500 and began delivery to backers in early January.

You can also read about Churrascaria on Board Game Geek and watch some reviews.

We use cookies on our website to give you the most relevant experience by remembering your preferences and repeat visits. By clicking “Accept”, you consent to the use of ALL the cookies.
Do not sell my personal information.
Cookie SettingsAccept
Manage consent

This website uses cookies to improve your experience while you navigate through the website. Out of these, the cookies that are categorized as necessary are stored on your browser as they are essential for the working of basic functionalities of the website. We also use third-party cookies that help us analyze and understand how you use this website. These cookies will be stored in your browser only with your consent. You also have the option to opt-out of these cookies. But opting out of some of these cookies may affect your browsing experience.
Necessary Always Enabled
Necessary cookies are absolutely essential for the website to function properly. These cookies ensure basic functionalities and security features of the website, anonymously.
Functional
Functional cookies help to perform certain functionalities like sharing the content of the website on social media platforms, collect feedbacks, and other third-party features.
Performance
Performance cookies are used to understand and analyze the key performance indexes of the website which helps in delivering a better user experience for the visitors.
Analytics
Analytical cookies are used to understand how visitors interact with the website. These cookies help provide information on metrics the number of visitors, bounce rate, traffic source, etc.
Advertisement
Advertisement cookies are used to provide visitors with relevant ads and marketing campaigns. These cookies track visitors across websites and collect information to provide customized ads.
Others
Other uncategorized cookies are those that are being analyzed and have not been classified into a category as yet.
SAVE & ACCEPT