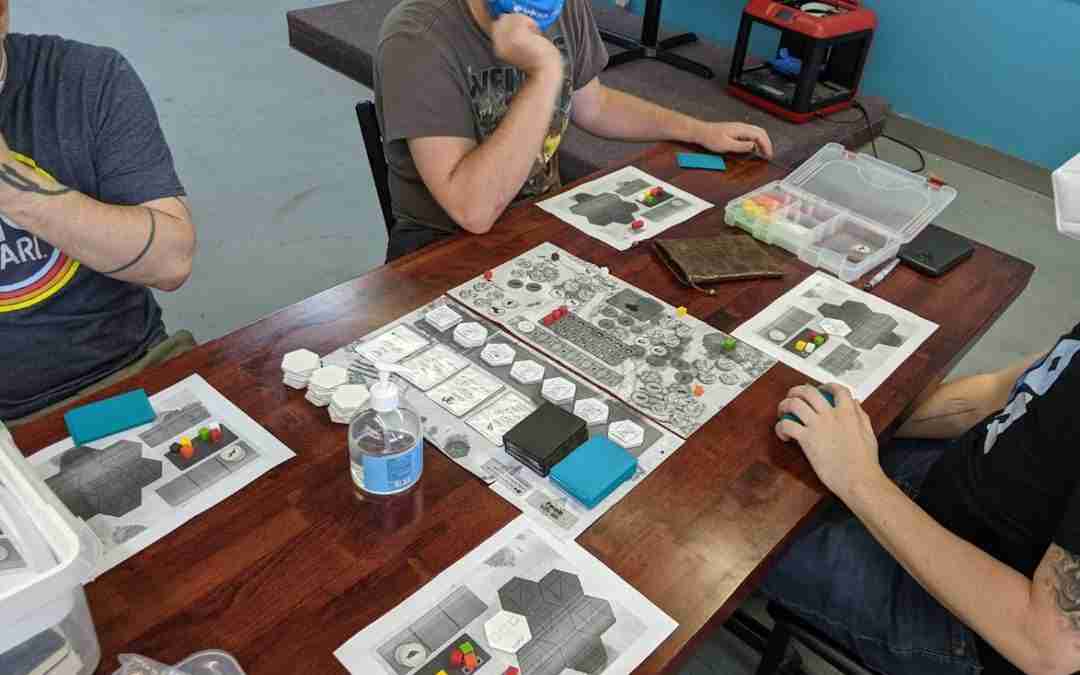 Five Tips To Rock Playtesting Events as a Playtester

We’ve talked a lot about playtesting these past few weeks, but we did so because it is such an important and overlooked area of game creation. It is absolutely vital for designers to get feedback from playtesting events to ensure their game is done well. If you are curious about the various phases of playtesting, feel free to check out our post that break down the phases we take our games through.

I decided to take on the responsibility of writing this post because one of my jobs here at Absurdist is to help playtest games that Will and Dave create. I thought I’d share what I have experienced and give you some overall tips that will help you be an epic playtester if you’re ever lucky enough to sit in that space.

The designer should let you know what stage of playtesting they are on and what they want you to consider when playtesting. It is extremely important to provide feedback only in these area(s). This helps create a smoother and more focused process for the designer. However, if you have any thoughts outside of the specified questions, ask the designer if they are open to hearing feedback on other things.

An important thing to remember is that these are prototypes of games. Most of the time, they don’t have finalized art, colors, design, etc. Thus, giving feedback that you don’t like a color or art style isn’t very helpful. This can come into play as the game is further along in the design process, but most designers will focus on mechanics, balance, feel, and whether the game is enjoyable first.

Come With An Open Mind

It can be hard to show up and not have expectations of how amazing a game will be. Most of the time, we are used to playing a completed game. Games that have already gone through the process of being broken, rebuilt, and put together in a way that feels good and complete to players.

When it comes to playtesting, you’re generally not playing a completed game. This means that it is not going to feel as good as a game you buy off the shelf does. There will be many things that are overpowered or don’t work right or aren’t fun to do. Expect to encounter a wide variety of enjoyment, experiences, and feelings when it comes to playtesting. Playtesting aims to help the designers adjust and build their game to be ready for game shelves.

Be Aware of Game Type

When going through feedback from other playtesters, I’ve noticed that they often want to turn the game into something it’s not. Everyone has a preference for the types of games they enjoy; whether they are party, strategy, push your luck, or something else. However, your preference doesn’t matter when you’re playtesting unless it is specific to the type of game the designers are creating. It can be difficult to remember this because you want to help them create a game that you want to play, so it can be best to not playtest games you know you don’t enjoy.

For instance, if you are playtesting a party game, but you really love strategy games, it is not appropriate to share feedback that would turn that party game into a strategy game. Unless of course, the designer specifically asks for feedback on how to turn the game into a more strategic game. Remember that the theme and type of game are likely already determined by the designer, don’t try to change it.

Designers often have difficulty finding playtesters, but getting outside input is vital to the design process. Player’s have different perspectives, and those perspectives allow them to see issues with the game that the designer may not notice. Regardless of your skill level or understanding of the board game industry, you can still provide valuable feedback.

If you feel a bit nervous about giving a designer feedback, you might want to focus on Unguided Playtesting. The game is basically ready at this phase, but the designers are still testing the rule book. The only requirement is that you have not played the game before. You can focus solely on playing the game and making notes of anything confusing in the rules.

The only time I’d say you wouldn’t be a good playtester is if you happen to be one of those folx who hates board games.

All Suggestions Are Valid

The most challenging aspect of playtesting that I experienced was knowing when to give a suggestion and what suggestion to give. I would have all of these ideas or thoughts running through my head, but I wasn’t sure if they were worth sharing. Many times, I would keep my idea to myself and not share it for most of the conversation. When it felt like they weren’t getting anywhere with how to progress, I’d become more likely to share my suggestion; however, it took a while before I did.

Surprisingly, some of the best suggestions I’ve ever made were ones that I thought wouldn’t work or were dumb, but they ended up being in the final game. It’s vital to share everything that you think could improve the game in some way. The designer will sort through all feedback and see which ones make sense to move forward with and which ones don’t.

I’ve been actively working on sharing any ideas I have as I have them, as relevant to the feedback requests. Something I’ve also seen is that my idea might not be the right solution, but it sparks an idea for the designer that is. You never know what the designer needed to hear to get there, so share everything you can.

While the designer may ask you specific questions, I wanted to give you some things to think about while you play. Feel free to make your own notes to share with the designer on these things as well as what they specifically ask.

Make sure that you consider these questions in relation to: theme, mechanics, overall enjoyment, the way you feel when you play the game, and overall vibe. If you really enjoy the theme and 2 of the mechanics, let them know. If you are not a fan of one of the mechanics, let them know but also elaborate a bit and share what felt off. Do you think it makes the game slow down? Do you feel like it is tedious or distracts from the gameplay?

Perhaps you’ve read this blog and thought to yourself that you really want to playtest some games, but you aren’t sure exactly how to go about doing so. The biggest thing is simply finding a space, group, or company that is looking for playtesters. Here are a few things you can try to do so:

Come hang out with us!

PaleoVet Design Diary 5: Playtesting PaleoVet
Do All Board Games Have Themes?

END_OF_DOCUMENT_TOKEN_TO_BE_REPLACED

8 Considerations to Make Before Backing a Kic...

END_OF_DOCUMENT_TOKEN_TO_BE_REPLACED

The Risks & Rewards of Using Kickstarter

END_OF_DOCUMENT_TOKEN_TO_BE_REPLACED
We use cookies on our website to give you the most relevant experience by remembering your preferences and repeat visits. By clicking “Accept”, you consent to the use of ALL the cookies.
Do not sell my personal information.
Cookie SettingsAccept
Manage consent