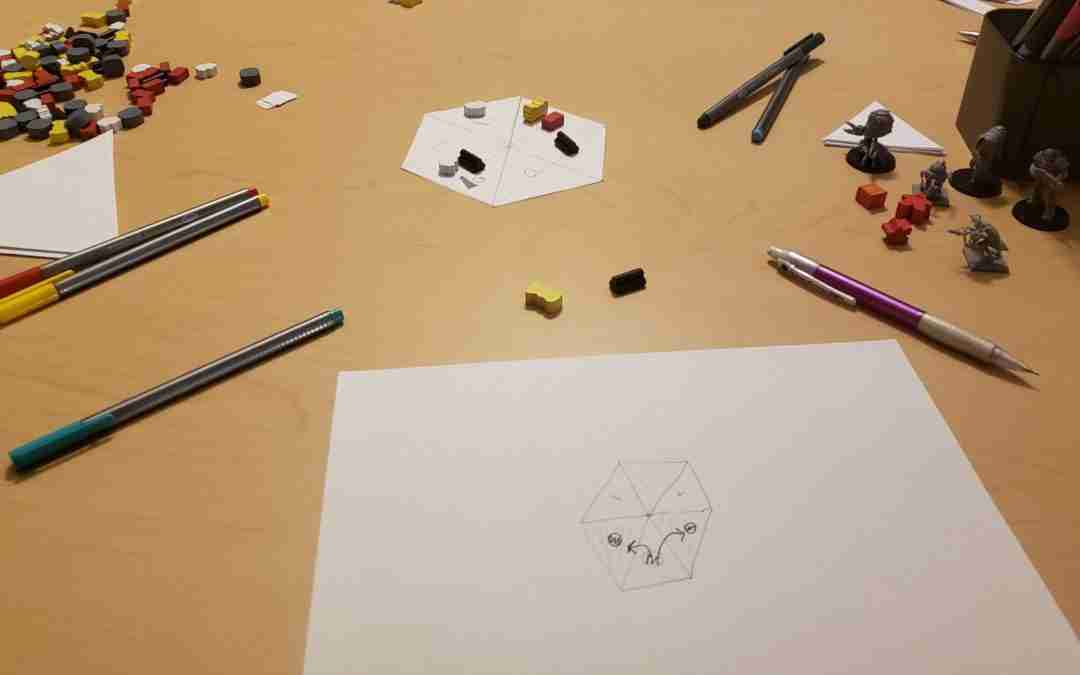 Playtesting is the act of exposing a game to the intended audience to collect data related to design flaws, balance issues, player strategies, and player feedback. When you get down to it, playtesting is the act of game design in action. It is the process of improving a game and making sure it is ready to appear on game tables everywhere. In this article, we will explain the four phases of playtesting.

The first of the four phases of playtesting is Proof of Concept. The goal is to ensure the core ideas and mechanics of the game are fun and worth spending time developing. We meet many people who tell us all about the game they’ve been working on for years and then show us a massive spreadsheet. Now Will and I love spreadsheets; they are a fantastic tool, but they aren’t a game. You can spend years tweaking numbers in them and never know if your game is actually fun.

Run proof of concept tests as soon as you have the basic game idea and mechanics framed out. You want to get a prototype in front of people as quickly as possible, even if it’s just words, numbers, and stick figures drawn on scratch paper. Your first playtest is rarely a smooth experience but always an informative one.

Next, you start on the formal mechanics testing. The goal here is to ensure that every mechanic in the game works smoothly, is intuitive to the players, and has a meaningful purpose in the game. Just because you have a cool idea for a mechanic does not mean that it will work in your current design. We often cut mechanics out of our games as we test only to use them again in a different design later.

This kind of testing can take many forms depending on the game’s complexity and estimated playtime. For short or simple games, you may run complete playthroughs. For lengthier or more complex games, you may only play parts of a game to see how a specific mechanic works.

The big key here is that you are playing with a purpose.

Every playtest should start with you explaining to players what you want them to focus on and end with asking targeted questions. Meanwhile, you are collecting quantitative and qualitative data, recording hard numbers like scores, the number of resources collected and used, and playtime. Include players’ feelings about the strategies they employed or how one mechanic felt compared to others. This targeted testing allows you to find and fix problems with your mechanics quickly.

During your mechanics testing, you also start your balance testing. Having a balanced game means that players never feel like one mechanic or resource is overpowering others and that every action and decision is meaningful. The main point of balance testing is to collect data through multiple gameplays to create a game that feels good to the players. Balance is generally achieved by looking at the numbers and player feedback and adjusting the mechanics, resources, and scoring values.

We love the power of spreadsheets and charts to record and analyze the data we collect during this stage. But it’s important to note that balanced numbers do not always make for a balanced game. Creating a player perception of balance is the goal; often, to make your game feel fun and balanced to players, it needs to be mathematically unbalanced.

Typically, we start at a mathematically balanced game and then slowly unbalance it until the game feels right. Sometimes giving more or fewer resources for an action or making a card more powerful than the math says it should be. A mathematically perfect balance will be the right one for some games, which is true in many abstract strategy games. However, you may need to make significant balance tweaks to make it fun for other games, as you often see in party games.

At the end of the day, remember that the perception of balance is more important than actual balance when playing most games.

Once all the mechanics are set in stone and the balance feels spot-on, you move into Unguided Playtesting. This is the last of the four phases of playtesting. It aims to ensure that any player can set up and play the game nearly perfectly using just the rulebook and no input from the designer.

You give a copy of the game with the rule book to a group that has never played before. From there, you can watch or record them as they try to use the rule book to set up and play the game to completion. This stage can be the most painful because you are not testing the game itself. Instead, you are testing the rule book, leaving you unable to answer questions or provide guidance. You will undoubtedly have many painful moments while watching the players, but it’s well worth it in the end.

As a designer, you know every element of your game intimately, making it hard to write rules objectively. You will often skip simple things because you think of them as obvious. Expect to go through multiple in-depth revisions of your rules as you conduct your unguided playtests. A well-written and organized rule book can make the difference between a game being amazing or just mediocre. The rulebook helps players see and understand the vision you had for the game.

Going through these four phases of playtesting will give you invaluable feedback. It allows you to make the changes necessary to create a game that will be brought to game table after game table.

A Statement on AI Art

END_OF_DOCUMENT_TOKEN_TO_BE_REPLACED

END_OF_DOCUMENT_TOKEN_TO_BE_REPLACED
We use cookies on our website to give you the most relevant experience by remembering your preferences and repeat visits. By clicking “Accept”, you consent to the use of ALL the cookies.
Do not sell my personal information.
Cookie SettingsAccept
Manage consent