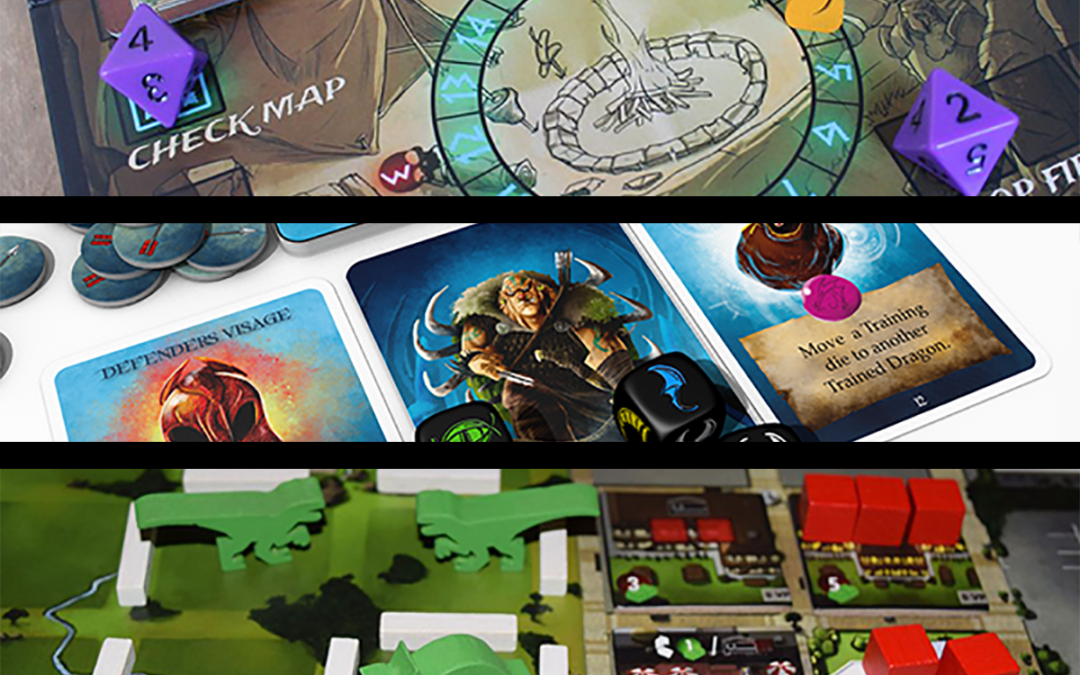 Harley’s Top Five Board Games of 2019

The last few weeks have dived the top five board games from Dave and Will, leaving only me to share my thoughts on the matter. I joined the party as the company’s CFO without any game design experience whatsoever, though I’ve wiggled my way into assisting with designs!

I tend to enjoy games that can be quite different from Will’s and Dave’s preferences, though we still play a wide variety of games at our game nights. Due to this (and my desire to not select the same game as anyone else), no game on my list has been seen in either of the other two.

While I’m fairly certain we played the game wrong for at least the first part, it was still ridiculously fun. Easily making it to the #1 spot of my list! Not only does it play extremely well with only two players, but it also kept us thinking. Each round testing our ability to resolve a puzzle as it was literally played out in front of us.

Set a Watch is a co-operative game for 1-4 players played over nine rounds. At the beginning of each round, you plan how you will take on the next round with limited to no information on what’s about to happen. Monsters come out, with various effects that spice things up, and your plan goes into action. Solving the puzzle that is created through the various card interactions taking place.  Defeating monsters – perhaps for good, or perhaps they’ll come back later – and clearing each location.

The puzzle brought in an interesting level of strategy that would change depending on how the Monsters came out but wasn’t so in-depth that it took away from the feel and fun of a good fight.

When it comes to themes, this might be one of my favorites. There are tons of game where you are some hero ready to slay a dragon for some random kingdom. But with Dragon Keepers, you are protecting the dragons from those “heroes”.

While it is a co-op, you go into the round “blind” not knowing what Dragon your fellow party-members plan on helping to protect. You can discuss general strategies, but you can’t let the other players know exactly who you’re helping.

One of my favorite things is to find games a young child would play that I also happen to enjoy. My daughter is now 11 and can play basically every game out there. Still, I am haunted by the memories of playing Candyland for hours because it was the ONLY game she knew. Enter Roam.

I am a huge Red Raven/Ryan Laukat fan and this doesn’t disappoint. The purpose of the game is to find lost adventurers who happened to be exploring and participating in some weird activities like gathering twigs for a nest. As you find each lost adventurer, they join your search party and let you explore more terrain.

The best part of this game is that each adventurer has their own search pattern that, when played, will allow you to place your search tokens on the board to match the pattern. As locations fill up, the player with the most search tokens on that location obtains the lost adventurer.

It’s a very simple game concept, provides enjoyment for all the players, but can also be an easy entrance into strategy games.

Ever since I was a kid I’ve had an obsession with dinosaurs leaving me a hardcore sucker for anything dinosaur-related. Of course, DinoGenics brings in the appeal of Jurassic Park without risking my personal wellbeing…

Each player is the owner of a corporation fighting for resources to build their park. And of course, the DNA to grow dinosaurs for visitors to come enjoy. Your goal is to create the best dinosaur theme park and resort possible. The victor is the one that has the most visitors.

What could possibly go wrong? Well, if you don’t take proper care of your dinosaurs, they will escape – becoming a danger to your park and those all-important visitors.

The Taverns of Tiefenthal

I hate deck building games. I hate games that have deck building components. I do not want to spend my time drafting cards, building a “superior” deck, and then doing who knows what with it.

The Taverns of Tiefenthal is a deck-builder.

It is also a strategy dice-rolling game that won me over despite my adamant hate towards deck building.

You are the owner of a tavern who has to balance their resources with the customers coming in to become the most popular tavern around. Your deck contains the beer handlers, beer suppliers, dishwasher, tables, and waitresses that help you build your tavern.

The rounds were fairly quick, the theme was fun, and time flew while playing the game. There is a dice drafting mechanism that slowed down the mostly simultaneous gameplay a bit that I kind of wish wasn’t part of the game, but it didn’t ruin it enough to take it off my top 5!

Comment below and let me know what games made it to your top 5!

END_OF_DOCUMENT_TOKEN_TO_BE_REPLACED

END_OF_DOCUMENT_TOKEN_TO_BE_REPLACED
We use cookies on our website to give you the most relevant experience by remembering your preferences and repeat visits. By clicking “Accept”, you consent to the use of ALL the cookies.
Do not sell my personal information.
Cookie SettingsAccept
Manage consent