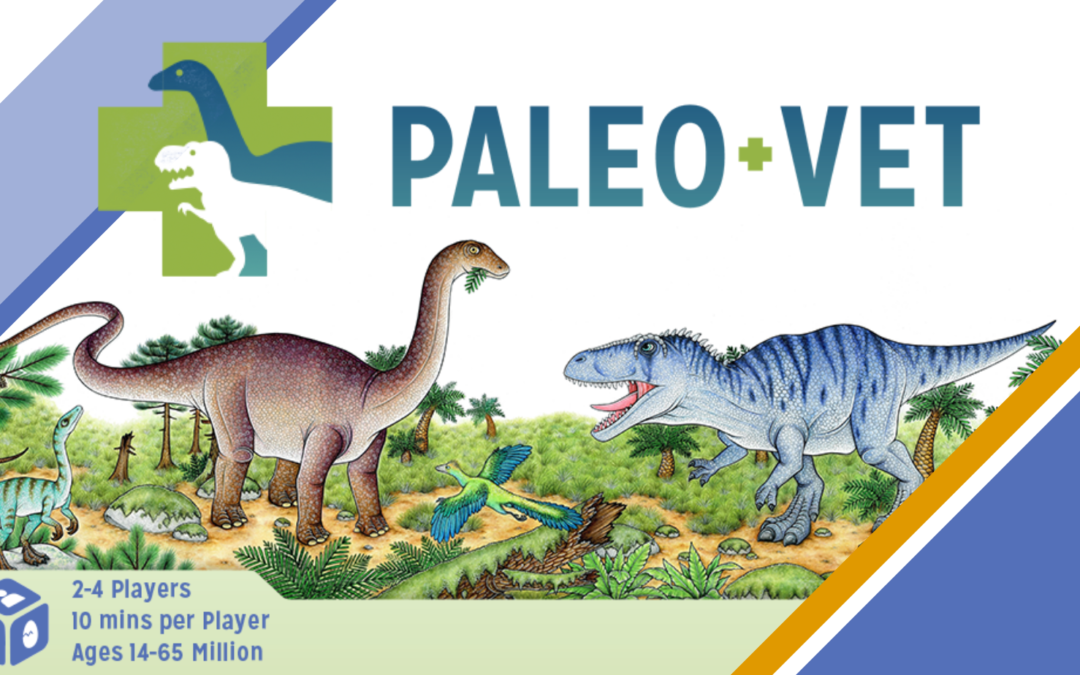 Introducing Our Next Game: PaleoVet

Absurdist Productions is proud to officially announce our second board game release, PaleoVet. If you’ve been following along, you’ll already know quite a bit about this game.

PaleoVet is my first publication as a board game designer, and I think it is an excellent place to start. So, in this post, I’m going to tell you a little bit about it.

What’s This PaleoVet All About?

In PaleoVet, you take on the role of a dinosaur veterinarian. (That is to say, a veterinarian for dinosaurs, not a veterinarian who is a dinosaur.) The world’s first dinosaur park closed (for safety concerns, obviously) and now it is up to you to care for the dinosaurs that have been left behind. Players compete to treat the most dinos during their stay on the island. Each dino is worth a certain amount of points based on how hard it is to treat. The player with the most points wins.

PaleoVet incorporates custom dice and beautifully illustrated tarot-sized dinosaur cards. On your turn, roll your dice and use the resulting symbols to tranquilize then treat dinos. You can also use your dice results to upgrade your hospital, buy wild tokens, or increase your dice pool.

So what’s the catch?

Dinosaurs only sleep for so long. Each turn, you’ll remove a sleep token from each of your dinosaurs, counting down until it awakens. If you don’t successfully treat it before it wakes, your dinosaur will make a hasty retreat from your hospital (it’s discarded). If it happens to be a carnivore, you’ll also need to discard another dino.

Each species of dinosaur has a unique ability. Some trigger when the dinosaur appears in the field. Some come into effect then the dinosaur enters your hospital. Others provide special abilities (such as rerolls or turning a dice to a specific face) while the dino is in your hospital. Do you keep that useful dino around or finish its treatment to secure your points?

You also are able to “spend” your rolled dice to obtain specialty dice, DNA “wild” tokens, and Upgrade cards. These decisions allow you to gain more control over what you are able to do and it impacts your gameplay.

Even though each roll is random, PaleoVet provides a wide variety of interesting choices allowing skilled players to gain a distinctive edge.

PaleoVet offers three modes of play. The full game is great for game nights when you want to dive in to all the strategy and options PaleoVet has to offer. If your gaming group would rather have a more casual experience, leave out the upgrades. This still allows for some strategy with the dinosaur’s special abilities, but you don’t have to worry about upgrades. For anyone who doesn’t want to worry about strategy or reading, you can leave out the dinosaur abilities as well as the upgrades. This third mode of play is great for introducing someone to a strategy game, to play with someone who does not read, or to play a language independent version.

Given the way it was designed, I’d like to say that PaleoVet is for everyone. Plus, it only takes about 45 minutes to play, and who doesn’t like dinosaurs?

PaleoVet will launch on Kickstarter on September 28th.

We’re keeping the campaign fairly simple, but we do have some cool stretch goals planned. If this sounds like a game for you, please, sign up to get notified.

END_OF_DOCUMENT_TOKEN_TO_BE_REPLACED

END_OF_DOCUMENT_TOKEN_TO_BE_REPLACED
We use cookies on our website to give you the most relevant experience by remembering your preferences and repeat visits. By clicking “Accept”, you consent to the use of ALL the cookies.
Do not sell my personal information.
Cookie SettingsAccept
Manage consent