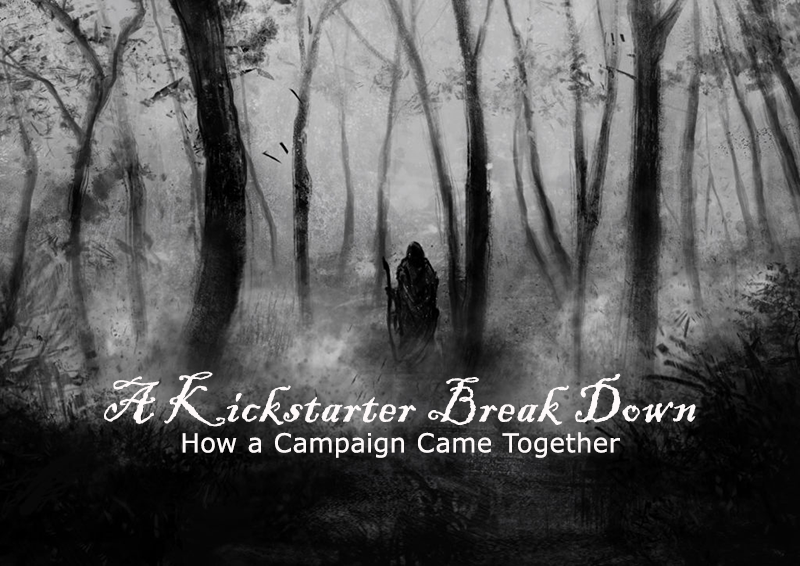 We recently ran another successful Kickstarter; this time as part of the RPG Zine Quest promotion. 149 backers pledged $1,261 to help us publish a one-shot adventure for the world’s most famous roleplaying game. So, I thought it would be fun to breakdown how the Kickstarter came together.

Will came to me on February 5th and suggested putting together a quick campaign for the RPG Zine Quest. Being crazy, I said yes, though it meant we only had about a week to throw something together. Thankfully, years as game masters gave us both plenty of notes and experience to work with.

The actually planning for the campaign took up around six hours on a Saturday afternoon. Will, Harley, and I threw around ideas about which adventure we use, art direction, and stretch goals we might offer. We decided to publish a very successful adventure that I’d run about a year previously.

The following week saw Will doing research on manufacturing, stock art, and an artist for custom work. He also put together the campaign page. Meanwhile, I was typing up the first draft of the adventure which involved fleshing out notes for the prospective GMs that would end up running it in the future. When I run a game I tend to do a lot on the fly, such as creating stat blocks right after players roll initiative. I had to come up with some solid stat blocks and provide notes on adjusting encounter difficulty to allow the adventure to work for a variety of group sizes and levels. I also needed to provide some items as treasure rewards that could conceivably work regardless of the players.

About mid-week, we switched roles. I started revising the campaign page and reviewing the data Will had collected on custom art and manufacturing rates. Meanwhile, Will began proofreading and poking holes in the adventure draft.

A Leap of Faith

Then we launched. We were pretty confident we would fund. We set our goal at a very low $99. This was the absolute minimum we needed to cover the costs of the stock art we purchased and print a dozen copies or so. Our hope was that we might hit around $500. Considering we had done no premarketing and had no real plans for marketing outside of posting to our social media, this seemed reasonable.

We funded in the first few hours and kept a steady clip of around ten backers a day until the campaign closed. From the data, we know a big part of this was the promotional boost we got from Kickstarter itself. The campaign was highlighted on the RPG Zine Quest page. We also had a fair number of people who backed Churrascaria decide to throw some money at the zine.

We saw 33% of campaign followers convert to campaign backers, an excellent rate of conversions. A fair number of people ended up switching from just the PDF to the physical copy of the zine. This followed the updates where we showed off art or a short video of our draft copy of the zine. This was a good reminder that people like to see what they are actually going to get. Even if you don’t have that to show when the campaign launches, you should make sure to show it before the campaign ends.

Not only did we fund, but we managed to break $1000 and unlocked two stretch goals, resulting in custom art and a second adventure needing to be written. By overwhelming vote from our backers, the second adventure will be a sequel to the initial adventure offered in the campaign.

We gained valuable insight that not only is there an interest in this sort of project, which we already sort of knew from seeing other successful RPG Zine campaigns, but there is an interest in them coming from us specifically.

An unexpected side effect of the campaign was the number of backers who found our website and ended up ordering Churrascaria. To those people, we hope you enjoy the game and thank you for your purchase.

For those who missed the Kickstarter campaign, but would like to preorder the zine, it is available in our webstore. And of course, we plan on having copies to sell at our convention appearances throughout the year.

Along with the Sequel adventure that we are already writing, Will and I have also discussed putting together some additional adventures to publish in the future, either through another Kickstarter or simply from our online store.

A Preorder, a Kickstarter, and Geekway
Witnessing a Pandemic

END_OF_DOCUMENT_TOKEN_TO_BE_REPLACED

END_OF_DOCUMENT_TOKEN_TO_BE_REPLACED
We use cookies on our website to give you the most relevant experience by remembering your preferences and repeat visits. By clicking “Accept”, you consent to the use of ALL the cookies.
Do not sell my personal information.
Cookie SettingsAccept
Manage consent