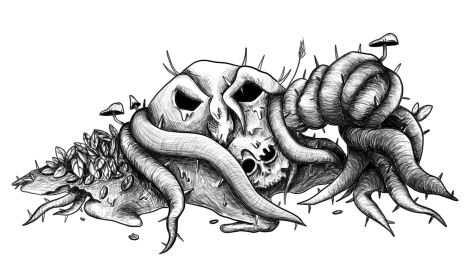 Our Approach to Game Art and Style

I’d like to talk about our approach to game art and style. Art and graphic design are a huge part of making a good board game. You’ll notice that some publishers find a few talented artists or are artists themselves and develop a company style. Red Raven and Leder Games, for instance, have very distinct art styles across their games. Others have a different style for every game, we fall more into this group. Regardless, even the most minimalist and abstract of games have a great deal of thought put into art. Often, art is the second biggest expense in publishing a game after manufacturing costs. With all of that said, I thought I would give a glimpse into how we decide on our game art.

The Forest of Lost Children

Let us start with our most recent successful project. Kickstarter provided the initial art brief with the RPG Zine Quest rules. The zine had to have a 5.5” x 8.5” layout and had to be one color printing. This limited our canvas size and meant no super colorful illustrations. We knew that our plan was to write something like an old school dark fairy tale adventure. With that theme in mind and the limits set by Kickstarter, our thoughts went back to the early edition RPG books of our youth. Which led to the decision to try to emulate those styles. Along with that, we had budget constraints and wanted to keep this project relatively cheap. To do that we only planned on a few custom pieces of art, the rest would need to come from stock sources.

We contracted artist Jason McNaughton and also started looking at stock art. A useful source for tons of low-cost stock art is the DriveThruRPG website. We purchased several pieces from there. We also backed The Forge Studios on Patreon to gain commercial access to some of their setting maps and illustrations.

This approach let us flesh out the look of the zine and provide style references that Jason could use as he sketched out the custom pieces we wanted. The decision to go old-school also led to Will dusting off his old dungeon master skills and sketching out the maps for several areas of the adventure.

The net result of all of this is that the zine really has a polished but old-school vibe to it that we both love, and we think the backers are going to love as well.

Churrascaria was my baby for several years and as my first game. I learned a lot as we worked on the art for it, and got lucky as I didn’t even have to search for an artist. I happened to already know the amazing Ellie Kirkner (Jang). We spent several weeks going back and forth on what I wanted the game to look like. I knew only one thing from the start: I wanted the food cards and the action cards to have very different styles.

I wanted the food to look and feel real as if it really were there on your plate ready to be enjoyed. When discussing this with Ellie, we both kept bringing up Sherriff of Nottingham as a reference. Starting from there, we played around with card orientation a bit, eventually settling on a landscape layout. This allowed us to make the food illustrations larger. It also looked really great laid out in front of the player to create their “plate”. As anyone who has seen the game knows, Ellie also knocked the art out of the park. Every food card is beautifully rendered in this painterly style that leaves you drooling. And the number one comment I always hear after people play Churrascaria is “Now, I’m hungry.”

The action cards were meant to feel much more abstract. I wanted them to be more like caricatures and more disconnected from the players. This was to blunt the blow of the cutthroat effects they caused. It’s a light-hearted game, and more realistic art would have made it feel too serious. That would have dampened the fun and conflicted with the fact people are yelling “Leave my meat alone!” at each other. The caricatures also allowed us to insert a diverse cast of characters into the game, something I have had several players tell me they really appreciate. It is also important to both Will and I that our games are as inclusive as possible.

And a little easter egg for you all. This Stop Playing with the Food card features the two friends of mine that really inspired the entire thing to start with. The waiter introduced me to Churrascaria restaurants, the juggler kept stealing everyone’s food.

And now to our currently in-development game. We designed PaleoVet as another very lighthearted game. It is all about trying to capture and treat sick dinosaurs, a theme that really seems to resonate with people. A number of different art styles could have served this theme. As we searched for artists for the game, we narrowed it down to two amazing illustrators with very different styles.

One was very realistic and really focused on accurate anatomy, reminiscent of the books about dinosaurs I remember reading as a child. To be honest this was the style I was leaning towards. The other had a much more vibrant storybook quality to it that took a little more artistic license. I know Will, in particular, agonized over the decision on which one to choose for several weeks. Based on the images here you can guess which one we chose.

The Newest Member of Our Art Team

The work of the talented Zuzana Randáková has simply knocked our socks off. So far, we have received five illustrations of the twenty-seven different dinosaurs the game will offer and each one has been more amazing than the last. While I may have been leaning towards the more realistic look originally, the personality Zuzana has instilled in each dinosaur does a far better job of capturing the essence of the game in a way I did not expect.

Another plus is that she has been a joy to work with as far as feedback and revisions are concerned. This is partly because we made sure to incorporate some important rules about that into the contract. Something I might talk about more in a future post.

END_OF_DOCUMENT_TOKEN_TO_BE_REPLACED

END_OF_DOCUMENT_TOKEN_TO_BE_REPLACED
We use cookies on our website to give you the most relevant experience by remembering your preferences and repeat visits. By clicking “Accept”, you consent to the use of ALL the cookies.
Do not sell my personal information.
Cookie SettingsAccept
Manage consent