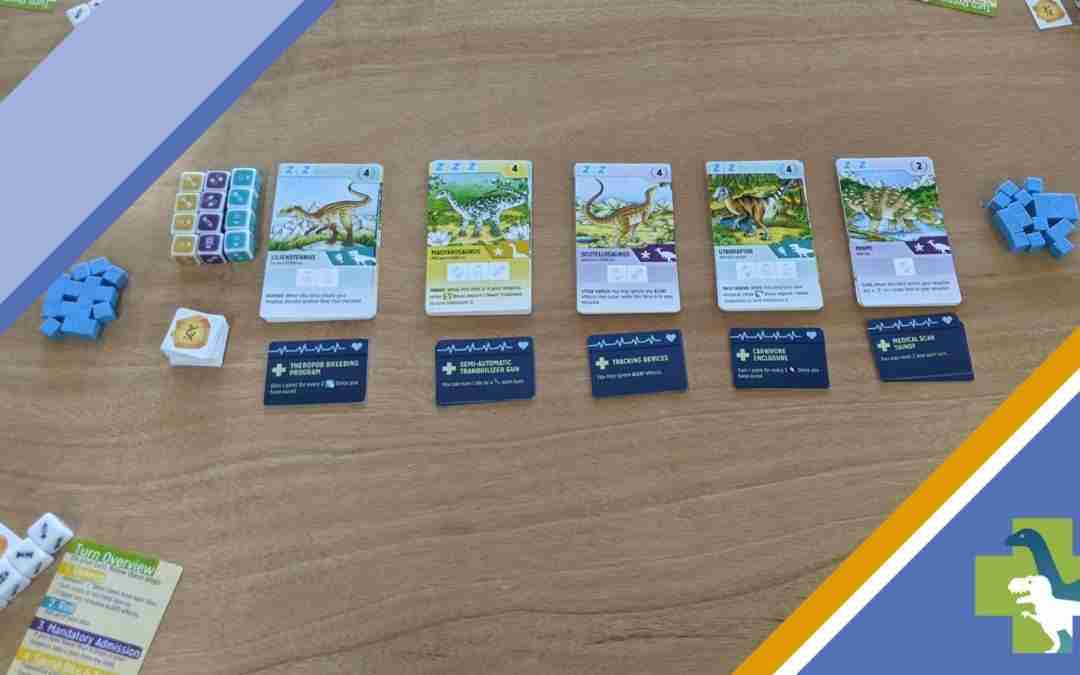 We wanted to give you a sneak peek at what the pledge tiers will be when we launch our Kickstarter in a few weeks. We are so excited to have put these together to bring our game to your table!

Bringing PaleoVet to life is something we have been dreaming about and working on for quite some time. We want to share a few stats with you on the game itself and then we will dive into the pledge tiers.

For $3 + shipping, you will receive our eternal gratitude for helping our game get that much closer to becoming a reality.

As a physical token of that gratitude, we will send you one random dinosaur sticker featuring the art in the game. Unfortunately, we won’t be able to take requests, but we will be sharing a survey for folx to vote on their favorite dinosaurs so keep your eyes open and read the updates! The top dinosaurs will become the stickers we randomly send out.

Not only will we send you a random dinosaur sticker to show our appreciation, but at this tier level, you will also receive one copy of the game.

This seems pretty obvious as we wouldn’t say in the tier “base game” if you don’t get a copy of the game. The base game is great for folx who are on a budget or don’t care so much about the fancy components that will be added in the Deluxe game.At the base game tier, you will also receive any base tier stretch goals that we unlock during the campaign!

We decided to give you a bit more in appreciation since you are bringing us even closer to our goal.

You will receive a dinosaur sticker pack with a collection of stickers featuring art from the game. This is really lovely because you will get an assortment of stickers instead of just one, increasing your odds of getting that dinosaur you REALLY want.

You will also receive one copy of the base game. This helps us with our logistics and makes this tier possible for everyone to achieve what they would like without causing a lot of headaches, extra costs, and strain.

However, we are also adding in a few nicer components for you to really be able to enjoy the game:

Note about all Pledges

Regardless of what pledge tier you choose, you will be able to add on additional copies of the game or other add-ons we have available or unlock throughout the campaign.

If you know for a fact that you want an add on, you can increase your pledge tier through Kickstarter to account for that. This is a great way to help us get to more stretch goals. When the campaign ends, we will have a pledge manager that you can visit to pick out everything you want. Going this route will get you a “credit” for the amount you contributed to the campaign in the pledge manager.

A pledge manager is almost like an online store with a shopping cart. The neat aspect of it is that it connects to Kickstarter so it knows what tier you pledged at and what you receive at that tier. It also knows how much you contributed which allows you to have that “credit” to apply to additional games, add-ons, or other things as you see fit. There’s nothing extra that you have to do outside of clicking a link and selecting the add-ons that you would like as well as paying any remaining balance (for shipping and additional add-ons you didn’t account for through Kickstarter.

Due to these two reasons, if we were collecting shipping through Kickstarter, we would have to charge you more to account for the percentage taken by Kickstarter. We don’t want to do that as we are not trying to make any money off of shipping.  While payment processing always takes a percentage of the sale, including shipping, we do not increase for that as it’s simply a part of being in business. We want to charge you exactly what it costs us.

Something else to note is that, at this time, we are not able to ship to multiple addresses. This means that if you were to follow the example above and purchase a game for yourself as well as a game for a friend, then you would have to have both of the copies shipped to the same address. Some folx get around this by making a second Kickstarter account to purchase the items they want shipped to a different address.

While we will be sharing our planned stretch goals next week, I wanted to give you all a heads up on how we are handling them for this campaign!

As you can see with our components list above, we are using really high-quality materials for the game right out the bat! We don’t have to hope for a certain stretch goal to be able to give you the game we are proud of. The stretch goals are just really exciting things we are adding in to make it even better! With that being said, there may be some slight changes to the component list or items included at various pledge tiers based on the stretch goals we have managed to hit.

END_OF_DOCUMENT_TOKEN_TO_BE_REPLACED

END_OF_DOCUMENT_TOKEN_TO_BE_REPLACED
We use cookies on our website to give you the most relevant experience by remembering your preferences and repeat visits. By clicking “Accept”, you consent to the use of ALL the cookies.
Do not sell my personal information.
Cookie SettingsAccept
Manage consent