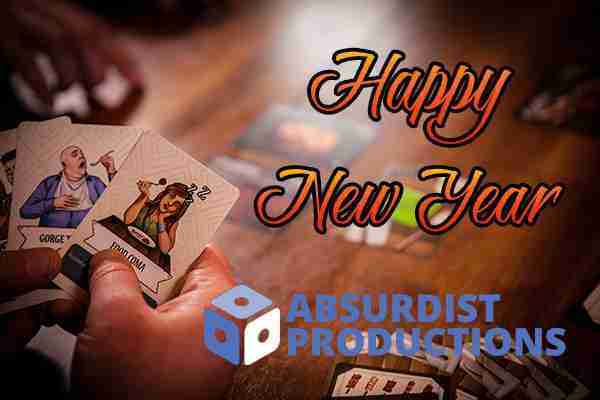 Reflecting on 2019 and Dave’s Top Five

With a new year upon us, it is a great time to reflect on 2019. 2019 was an amazing year for us here at Absurdist HQ. Churrascaria was released out into the world. We were chosen for the PAX South Tabletop Indie Showcase and the DreamHack Indie Tabletop Spotlight. We hit up a dozen conventions throughout Oklahoma and Texas where we spread the word about our crazy game of meat and gluttony.

In between all of that, we spent a lot of time doing market research, which when you are a game designer means playing other people’s games to see what’s happening in the industry. Will, Harley, and I have all put together our top five lists for last year and in no particular order. We’ll be presenting them to you over the next few weeks. Let’s start with mine.

I’m a sucker for abstract games, and this is a great one. The rules are simple but provide a great deal of depth. The simple goal is to get your Adept across the board. You do this by using various elements to manipulate the path ahead of you to both attack and defend against your opponent. All three element types feel thematic. The ever-changing nature of the board and interaction of said elements results in a game that feels like a mage’s duel.

I will admit that the game does end up a bit more tactical than strategic. Its ever-shifting nature makes it hard to keep to long term strategies. Production values are top-notch, and the simple art design really pops on the table.

I love the Universal Monsters. I was the only 10-year-old I knew who could speak in depth about Bela Legosi and Boris Karloff back in the long-ago 1990s when I used to watch them every Saturday on TMC.

Horrified brings back the joy of that era for me. It pulls from all of the classic films, and even sneaks in an Abbott and Costello cameo. They fit in all seven of the most well-known monsters, and each has its own unique rules as to how it must be defeated. Finding an exit is a mini-games within the main game. You can also mix and match which monsters you want to play against each game, which both changes up the gameplay and allows you to adjust the difficulty. Facing just Dracula is a breeze, but throw in Frankenstein’s Monster and his Bride and things get a lot more dangerous.

Parks reminds me of the best parts of Tokaido but paired with a lot more player interaction. Resulting in a game that, especially at four players, ends up significantly more cutthroat. The gameplay is simple but nuanced with lots of meaningful decision making, and lots of opportunities to block an opponent and wreck their plans as you enjoy your own exploration of the parks. The game also looks beautiful and all of the components are super high quality, I especially love that the wild tokens are all different wild animals.

Will you be the savage elemental beast or the courageous Foxen heroes? While this game is fairly light, it’s a great entry point into asymmetrical games. Both sides use a similar deck of cards to choose their actions, but end up with extremely different playstyles.

As the Foxen, you control a whole host of characters that can both move around the main map, and jump on the second map representing the body of the great beast you are striving to slay. Then there are the Beasts themselves, each of which has its own unique set of victory conditions and special rules. One just wants to kill the Foxen and another is area control. This gives the game a lot of replayability and more depth then it’s simple mechanics and somewhat cartoony look might imply.

Action programming, area control, meeples with mech suits and plastic weapons you can attach to them, what’s not to love. Like all of the Tiny Epic games, they pack a ton into this little box. However, I find that unlike many of them, this one still manages to stay very streamlined and focused in its rules while still being very deep in the strategies and decisions you have to make throughout the game. I’ll admit though, that the ability to upgrade into the mech suit and festoon it will little guns is a huge selling point for me.

It was harder than I expected to narrow the list down to just these five games. A lot of really great games came out in 2019. Next time we’ll take a look at Will’s top five. We tend to have different interests in games so there is minimal crossover in our lists. And I look forward to playing lots of other great games as 2020 progresses.

END_OF_DOCUMENT_TOKEN_TO_BE_REPLACED

END_OF_DOCUMENT_TOKEN_TO_BE_REPLACED
We use cookies on our website to give you the most relevant experience by remembering your preferences and repeat visits. By clicking “Accept”, you consent to the use of ALL the cookies.
Do not sell my personal information.
Cookie SettingsAccept
Manage consent