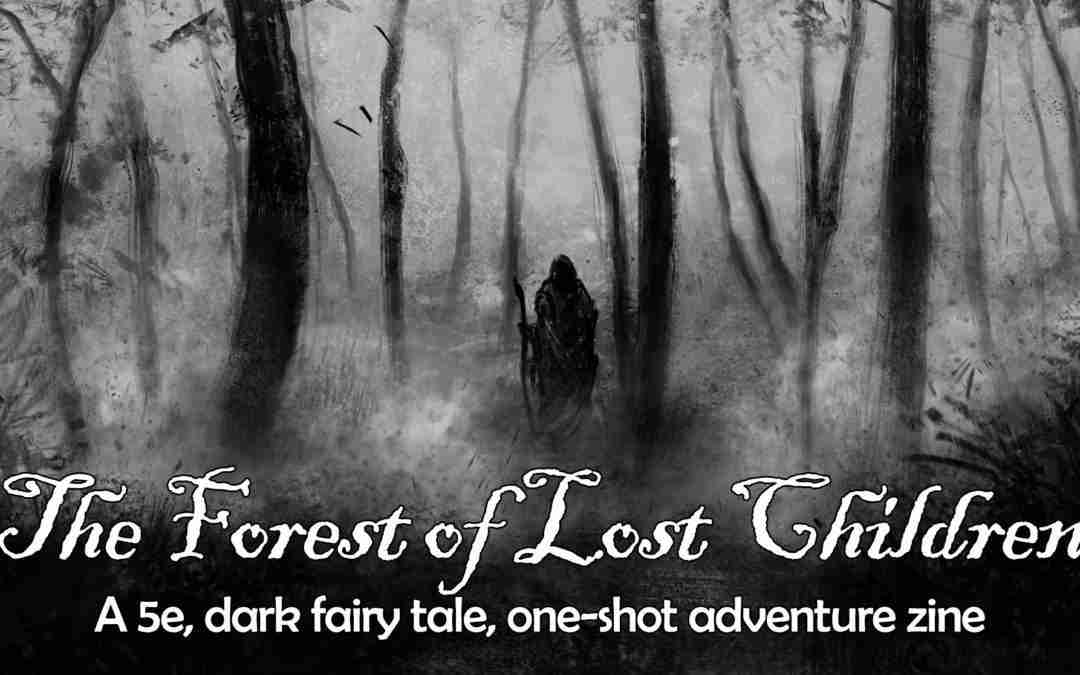 Check out our Kickstarter preview page to be notified when the project launches!

The forest of Lost Children on Kickstarter

So far, Absurdist Productions has focused on board games, but David and I are both lif-long role-players and game masters. In fact, we were both developing homebrew content for various editions of D&D, Fate, and other RPG systems long before we ever considered sharing that content outside of our own game groups.

Over the last couple of years, I’ve introduced Harley and her daughter, Verlina, to tabletop role-playing. When Verlina was 10, I asked David to run her first adventure, introducing her to 5e. Dave happily obliged with what turned out to be a fantastic, whimsical, and challenging one-shot adventure. That adventure would later come to be called “The Forest of Lost Children.”

This month, Kickstarter announced it’s Zine Quest promotion for the second year. To participate in this challenge, creators have to produce a short, black and white, “zine” of RPG content. After a quick discussion, we couldn’t resist.

We are launching The Forest of Lost Children on Kickstarter tomorrow, February 18th, as Absurdist Production’s first foray into the world of role-playing games. Since we are doing this as part of the Zine Quest promotion rewards will come in the form of a physical 5.5″ x 8″ paper booklet of the adventure as well as a digital download of a PDF of the same.

Here is a little preview…

The picturesque village of Hamford has sat peacefully at the edge of the great forest for generations without fear. It is a place of simple tradesmen and farmers, where nothing of note ever happens and the greatest excitement comes every year as the fall festival nears.

This year however things are different. Over the past several weeks several of the village’s children have gone missing. Though the villagers have sent parties into the forest to search, no sign of the children has been found.

It is up to the adventurers to solve the mystery, and if possible, bring the children home safely bring them home safely.

Paleovet Design Diary 1: Inspiration
A Preorder, a Kickstarter, and Geekway

END_OF_DOCUMENT_TOKEN_TO_BE_REPLACED

END_OF_DOCUMENT_TOKEN_TO_BE_REPLACED
We use cookies on our website to give you the most relevant experience by remembering your preferences and repeat visits. By clicking “Accept”, you consent to the use of ALL the cookies.
Do not sell my personal information.
Cookie SettingsAccept
Manage consent