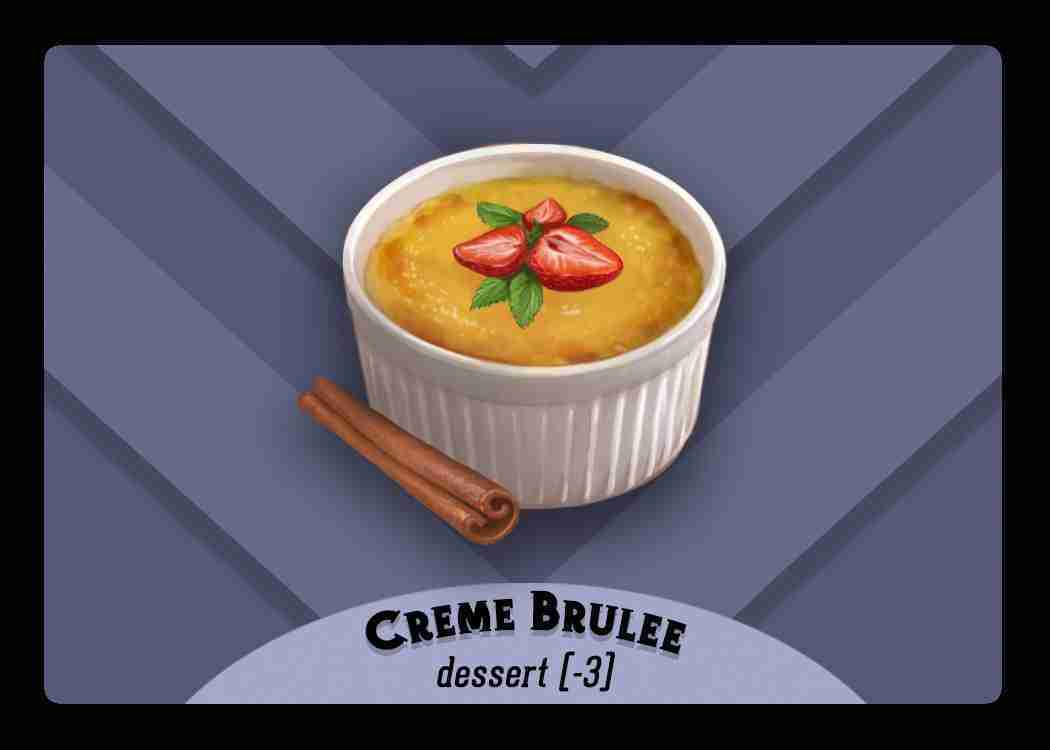 The Making of Churrascaria – Part 4

Been busy the last few weeks between attending Super! BitCon here in OKC, getting interviewed by a local podcast, and generally trying to spread the word of Churrascaria around here. Figured it was time to get back to the design diary.

Last time we looked at the food cards in general. This time I wanted to look specifically at one of the dessert cards. Partially because it looks delicious, and partially because it will help show off how important research can be, and the games iterative development. Below you can see the Leite de Crème card. It’s a delicious custard dessert that at this point sits at -4 and is the second lowest value card in the game. 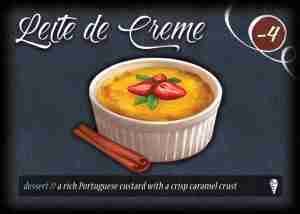 Over the course the game’s development this card has gone from a +3 in the very first design, to a -3 once I moved sides and desserts to negatives, and finally to a -4 as I tweaked and adjusted the points balance.

Beyond that, however, the card has also changed names more times than any other. If you can’t guess from the art and description, this is essentially a Crème Brûlée. And you will find it called that on many Churrascaria menus here in the United States. Since the original version of the game used the English names for everything, that was what I called it in those early versions. It is also one of the reasons I decided to change things. Because of the nature of the English language, and the way we adopt words, I had cards with titles that arguably came from a whole slew of different mother languages including English, Spanish, and French. None of which have anything to actually do with Portuguese. However, you can the original card art for the Crème Brûlée here, with that earlier point value I mentioned 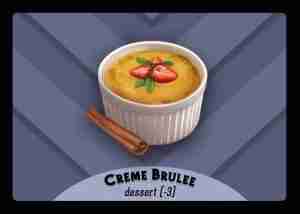 Now when I decided to make the move to calling all of the cards by their Portuguese names I started doing my research, which really meant a lot of Google searches. I tried to scrub menus from actual Brazilian churrascaria, and looked for Brazilian recipes for the various dishes to try and get the names right. This resulted in a crash course in Portegues grammar, the differences between Brazillian Portuguese and Portegues from Portugal, and the knowledge that much like the rest of the world they call the same dish different things depending on region. But after trying to cross reference things as much as possible to get the most common names I felt like I had everything about right and I set about renaming the cards and passing that information off to my artist to update them at the same time she was working on a redesign of the card layouts and overall designs.

This resulted in me changing the name to Crema Catalana. Which is a type of custard dish with a caramel crust. And one that I did find on several Churrascaria menus. Of course, I missed one very important fact about Crema Catalana. It is not a Portuguese or Brazilian dish, it’s Spanish. A familiar neighbor to be sure, but still completely wrong considering I using the Portuguese for every other dish in the game. 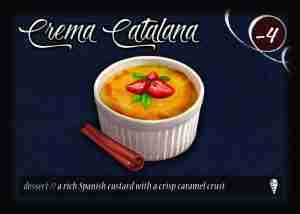 The reason I know this gets back to the importance of research. Since I plan on a Kickstarter for this game in the fall, and I’m spending so much time playtesting it and showing it off to people, I wanted to make sure I had everything right. Plus I thought it would be useful to be able to pronounce them all correctly when speaking to people. It also seemed like a good idea to have those pronunciations in the manual so that players would have them for reference as well. During that research, I finally discovered the true name of the dish, Leite de Crème, that I mentioned back when I started this post.

The moral of the story is do your research, and keep doing your research. To top all of this off and make sure I haven’t gotten any of it wrong I’ll actually be meeting with some people from Brazil in the next month or so to double check all my spellings and pronunciations. Because even though the game is having fun with the concept of the Churrascaria style of restaurant, I want to make sure I’m respectful of the language and the culture I’m pulling these things from.

Now I need to get back to work. Keep on gaming folks.

The Making of Churrascaria – Part 3
Prototyping with Cricut

END_OF_DOCUMENT_TOKEN_TO_BE_REPLACED

END_OF_DOCUMENT_TOKEN_TO_BE_REPLACED
We use cookies on our website to give you the most relevant experience by remembering your preferences and repeat visits. By clicking “Accept”, you consent to the use of ALL the cookies.
Do not sell my personal information.
Cookie SettingsAccept
Manage consent