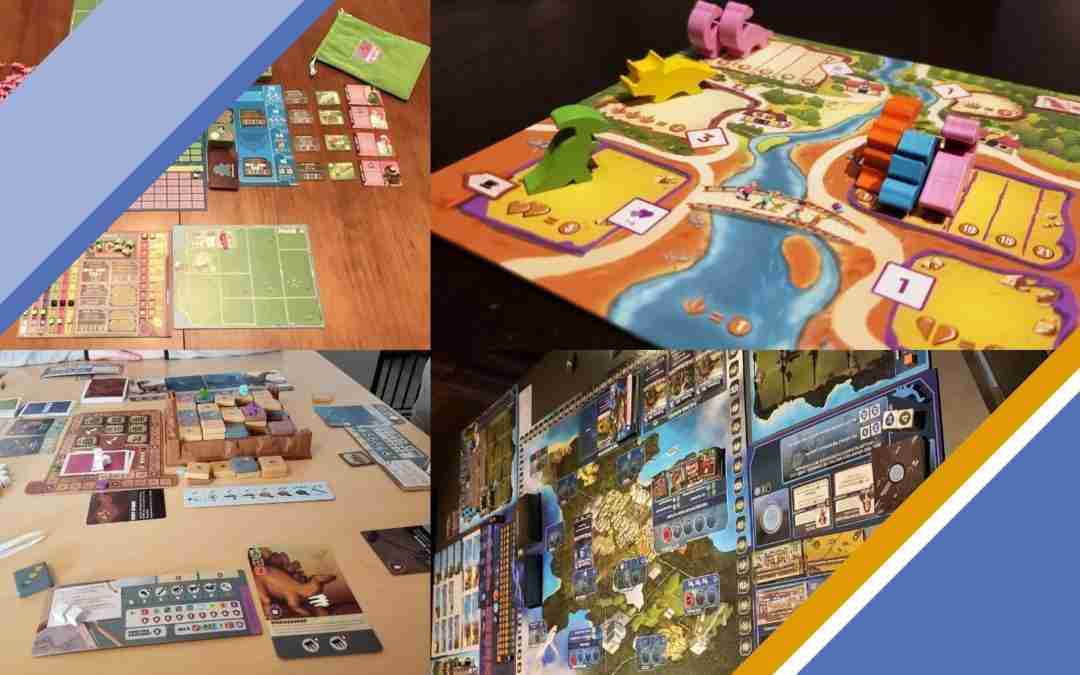 Anyone who has ever been a kid loves dinosaurs. They spark fascination, fear, and something primally exciting in us. They can also be quite adorable. So, in honor of our upcoming Paleovet game, here are our top dinosaur-themed board games. These are not in any real order, and all of them are a lot of fun.

DinoGenics is a worker placement and set collection game where players operate competing dinosaur parks. You take turns placing workers on different locations of the main board, gathering DNA, building new structures, and generating new dinos from DNA fragments. On your player board, you’ll place buildings, fences, and dinos. Each round, you’ll attract a certain number of visitors, limited by hotel space. Players with a higher reputation (usually from having more dinos) will attract more visitors. Visitors bring money. Money lets you buy more things.

Readers who’ve scrolled through Board Game Geek or Kickstarter a time or two might be surprised that I find DinoGenics more enjoyable than its more well-known counterpart Dinosaur Island, which is also on this list. Both games are rated 7.7 on BGG and share some similar themes. What I like most about DinoGenics is that it feels more streamlined, and I think it does a better job of playing up the danger aspect of the Jurassic Park type theme with its overall aesthetics. It really gives the feeling of danger of a dinosaur park better than any other game I’ve played.

Of course, the more Dinos you have, the more likely you are to have a dinosaur “Rampage”, which is an important part of any dino park game. Rampages are kind of rare in DinoGenics, at least the way we play. I’d like to see them more, but when they do happen, they are super fun and interesting. Dinos break free of fences, eat visitors, and wreck buildings. The game encourages you to be a little reckless to up your score, and this just leads to more dino rampages. DinoGenics is definitely the most fun when you play to the theme and see just how many dinos you can cram into your park with a minimum of safety standards.

We got Fossilis as a Christmas present last year. This is a family-friendly game where admittedly the dinosaurs are only present in fossil form.. You are paleontologists competing to collect fossils and reconstruct dinosaur skeletons. The game has a really unique tile-shifting mechanic on a 3d game board. Tiny fossil bits are hidden under the tiles which need to be shifted just like the dirt covering real fossils. Grabbing the plastic fossils with the provided tweezers really gets across the feeling of digging for fossils. It can be a little fiddly at times though.

Another interesting aspect of the game is the fact that you can score a fossil card by either completing the related skeleton or get partial credit for only having a few pieces. Opting for partial credit means you can move on to another dino that might be easier to achieve instead of getting stuck looking for a missing bone. This involves some strategic choices that our family hasn’t quite gotten their heads around. We all end up wanting to completely finish our goals, even if doing so means we won’t score as many points in the long run.

When shifting the large acrylic tile around the board, you can also intentionally shift other players’ positions. I think Fossilis is at it’s best when you are willing to venture into take-that territory and push other players’ meeples around (and off) the board.

Draftosaurus is a fairly light drafting game where you are drafting dinosaurs to attract visitors to your park. Each round a die is rolled that puts a restriction on that round’s drafting and players then take turns choosing dinosaurs to add to their park. The player boards have different pens that have their own specific restrictions and methods of generating visitor points.

I find the game is the most fun for me with two players. At which point an additional mechanic is added that has players removing a dinosaur from the game each turn, upping the strategic element as well as putting a slight take-that spin to things as you can block your opponent.

Our upcoming game PaleoVet will be a new entry into the world of dinosaur themed board games. While it’s set in a (former) dinosaur park, PaleoVet takes a different twist on the genre. Instead of running the park, you play a veterinarian caring for the dinosaur. If dinos are going to exist in our modern world, we want them to live their best lives.

In PaleoVet, players take turns rolling and spending dice to take a wide variety of actions. With the dice, you are able to cure dinosaurs, tranquilize additional dinosaurs, or purchase upgrades. The upgrades can be for your hospital to offer additional perks or to obtain more dice for more options in later rounds or DNA tokens, which are wild.

While the game is competitive, it doesn’t include much of the “take that” or direct competition as many other competitive games often do. This creates an experience where players can run their hospital, hoping to be the best, without worrying about being sabotaged or having to sabotage other players in order to win.

Personally, I love this wholesome, positive theme and due to this, I believe that the best way to play this game is when you go into it with the goal of saving dinosaurs instead of trying to win. How can you create the best hospital to save as many dinosaurs as possible?.

Dinosaur Island is the brontosaurus in the room when it comes to dino-themed board games. For most gamers it’s likely the one you will hear mentioned if you start talking about the genre. The 80s theme and colors are beautiful and do give a strong amusement park vibe. The game also has some really great strategic elements.

The Research Phase of the game is probably my favorite. Making choices between researching new DNA, increasing my Cold Storage, or getting new Dino Recipies is always interesting and feels really core to the theme of setting up a Dinosaur Park. It helps that the components are so cool looking. The process of going from that DNA to an actual dinosaur in the later phases is still interesting, but tends to feel a little micromanaged for my taste. Still, this does mean that there are many different strategies and ways to load your park with dinosaurs, while at the same time managing the workers and visitors that keep the park rolling.

You gain more visitors based on your park’s excitement level which corresponds directly with which dinosaurs you have. The park visitors in Dinosaur Island have a central role in the game as they are the only mechanic that provides victory points each round. Unfortunately, visitors in Dinosaur Island tend to get eaten a lot. While this relates to the theme quite well, I hate seeing the wooden bits of human life being reduced to an expendable resource. I also find this somewhat at odds with the vibrant colors and joyful look of the game.

Dinosaur Themed Board Games On My “To Play” List

Dinosaur Tea Party is a quirky social deduction game where you receive the honor of being invited to high tea. Unfortunately, you can’t remember anyone’s name and the last thing you want to be is who everyone is gossiping about. Using deduction, players have to figure out each dinosaur’s name until one player guesses three for the win. Admittedly, deduction games aren’t my go-to, but my family loves them. I do love tea, dinosaurs, and the art on these cards though.

Yes, I backed this one on Kickstarter. This hotly anticipated sequel to Dinosaur Island looks to be a great sequel of what Dinosaur Island started. Custom dino meeples (also aquatic creatures and ice age megafauna) along with the tile-laying mechanic to build your park look like great fun.

As of the time of this writing, Dinosaur World is stuck behind the global shipping delays that are plaguing the entire game industry. Hopefully, though, I’ll get to try it out soon.

Most dinosaur themed board games tap into the idea of creating your own dinosaur park and the struggles relating to that. It does make a really fun game as we struggle to do it better than the pros we watch movies about, but it’s also really great to find dino games that break that mold. We were able to tap into a different aspect of dinosaur parks with PaleoVet that let us bring something unique to the space. As huge dinosaur lovers, we look forward to any future dinosaur-themed board games that come out.

Why Absurdist Productions Uses Kickstarter
Introducing Our Next Game: PaleoVet

END_OF_DOCUMENT_TOKEN_TO_BE_REPLACED

END_OF_DOCUMENT_TOKEN_TO_BE_REPLACED
We use cookies on our website to give you the most relevant experience by remembering your preferences and repeat visits. By clicking “Accept”, you consent to the use of ALL the cookies.
Do not sell my personal information.
Cookie SettingsAccept
Manage consent