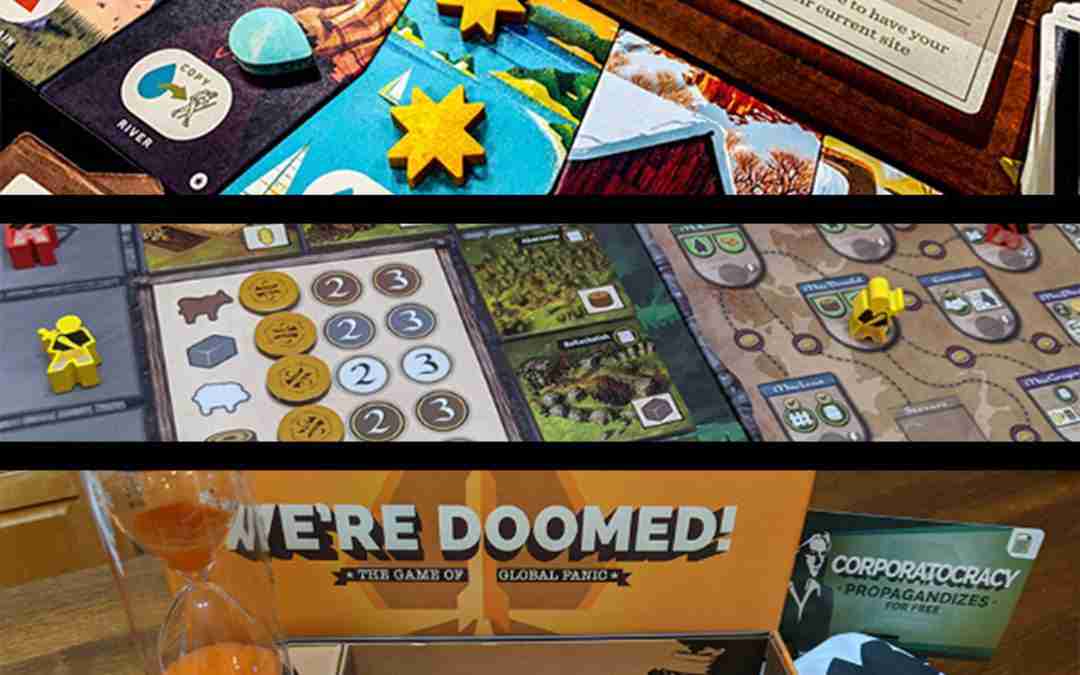 Last week we took a look at Dave’s Top Five Games of 2019, this week we will look at mine. You’ll notice that only one game appears on both lists. You’ll also likely notice a bit of a difference in the types of games we each chose. Many of my games lean toward the strategy and eurogame end of the spectrum (with one party game thrown in), while more of Dave’s are very American-style games. We enjoy all types of games here at Absurdist HQ, but we each have our own preferences. As we continue to put out our own games you’ll likely also see these differences in preference in how each game was designed. For instance, Churrascaria is very much one of Dave’s designs.

For now, though, let’s get to my Top Five in no particular order.

This one was also on Dave’s list, but I feel like it is worth mentioning again. Firstly, every detail is beautiful, from the unique “wild” animal tokens to the National Park paintings to the perfectly designed insert. Second, it is chill. The game is a meditation on taking a leisurely hike but also maintaining momentum. While there is a lot of player interaction, I don’t see it as cutthroat as Dave does.

Playing Parks, I can imagine coming to a beautiful photo op and realizing someone else is already there. Not wanting to disturb their experience, I quietly steal their camera and move on to the next vista.

I never played the original Glen Moore, but I’m glad to have finally settled into the glen. Glen Moore 2 is a great looking game with lots of variabilities. I’ve only made it through 3 of the 12 chronicles so far. I do have to admit that some are more interesting than others, but it is always nice to have a new twist on every game I play.

The game flows beautifully and the rondel mechanic forces you to make important choices each turn, like choosing between having more turns or getting that great loch with an amazing power (Loch Ness is OP, btw). Next, placement of your tile presents its own mini-brain-burn, trading resources now with potential for later, while being restricted by the location of your Scottsman. On top of this, the game rewards quality over quantity by giving penalties to the player with the largest territory (weird!)!

The game is quick too. I rarely have time for lengthy strategy games, but this one gets me the strategy fix I’m craving in a package that is easily digestible. Our 2-player games are lasting about 45 minutes, which is just about right.

This one was a surprise for me. I wasn’t expecting to like it much when we sat down to demo it at BGG Con. Five minutes in, though, I was hooked (right after the player to my left nuked me).

This party game does semi-coop right. Players cooperate to build a spaceship to escape a dying world. The better they cooperate, the more seats are available on the ship. But everyone is also competing for those limited number of seats so they can get off the planet alive. Also, it helps that the entire game takes exactly 15 minutes – by way of a giant, clunky (in a good way) sand timer. With the world’s destruction looming you have to make decisions quickly and hope you can score some of those coveted seats to the stars.

Quacks of Quedlinburg has slowly inched its way up into my top 10 games of all time. The only thing I could ask of it is more recipes. The Herb Witches expansion provides this. I’m not saying you need the expansion to enjoy Quacks, but after you’ve played the base game enough times, you are going to want it.

Quacks is a press-your-luck bag building game. You buy chits representing potion ingredients (with special effects), throw them in your bag, then draw them out one at a time, hoping to make something good that doesn’t explode. You get money and/or points from your finished potion, then you buy more ingredients, put everything back in your bag and do it again. Also, our 11-year-old absolutely dominates at this game and I haven’t been able to figure out how.

P.S. Taverns of Teifenthal and The Mind are other amazing, recent games by the same designer. Wolfgang Warsch is on a real roll.

I played Zoo-ography with the designers at BGG Con this year. This tile and meeple placement game had a lot more to it than what first meets the eye, which is the adorable and diverse animal meeples. The game involves laying tiles to build habitats for a variety of animals that could occupy your zoo, some of whom can share a habitat while others need their space. Zoo-ography requires a lot of planning and hoping that your opponents don’t adopt the animals you’ve been carefully building a habitat for.

I think my favorite part is the variable scoring system that is set up at the start of each game. Three cards (which also randomly name your city) indicate what the zoo needs and how you score points. Each set can be drastically different from the next, providing for tons of variety.

Next time we will look at Harley’s Top Five for 2019. If you saw us at a con last year you likely met Harley. Her skills as an accountant keep us legal. Her skills as a saleswoman have helped us sell tons of games at cons, and for some reason, she puts up with us forcing her to play so many games. I’m really curious myself what made her list.

END_OF_DOCUMENT_TOKEN_TO_BE_REPLACED

END_OF_DOCUMENT_TOKEN_TO_BE_REPLACED
We use cookies on our website to give you the most relevant experience by remembering your preferences and repeat visits. By clicking “Accept”, you consent to the use of ALL the cookies.
Do not sell my personal information.
Cookie SettingsAccept
Manage consent